It’s a downward spiral that began a month ago with a bong and a bag of white powder.

Now Keith the thief has no shame and is leaving kinky black lace knickers strewn on the back fence.

As the summer festive season comes around and longer days mean a chance for more loot, the infamous five-year-old black cat continues to roam his quiet Christchurch suburb in New Zealand, committing burglary after burglary. 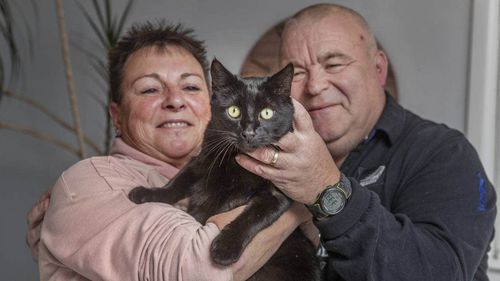 But the crimes have escalated recently, his stealthy paws uncovering some of the more risque items owned by Hoon Hay’s households.

But nothing prepared owners Ginny and David Rumbold for Keith’s most audacious gift of a bong and a ziplock bag of white powder.

A horrified Ginny immediately disposed of the paraphernalia that would incriminate the pilfering pussy, and strong words ensued about the dangers of a druggie lifestyle.

Sadly, it hasn’t seemed to resonate with Keith, and now she worries about where he’s hanging out and the kind of moggie thugs he’s keeping company with. 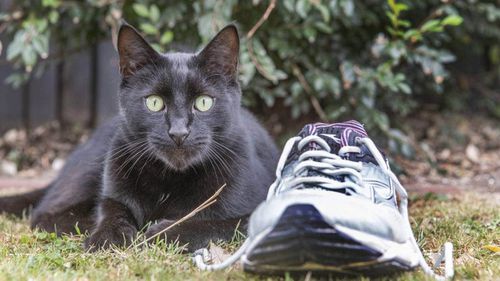 Like any parent of a troublesome teen, Ginny and David have been trying to keep Keith on the straight and narrow. But confining him to the house only results in them coming home to a naked Christmas tree.

Seeing baubles scattered in all sorts of strange places, Ginny has come to the conclusion that home detention doesn’t work for hard-core criminals.

His thieving antics haven’t gone unnoticed by the boys in blue, a police spokesman confirming the pilfering rascal has been on their radar for some time.

“We’ve been playing a bit of cat and mouse with this prolific offender.” 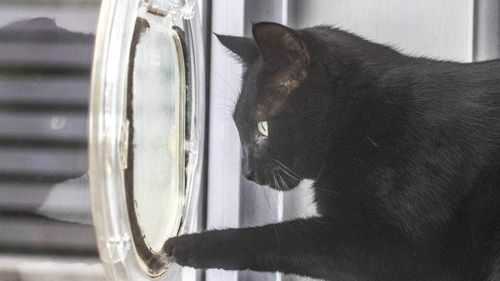 The spokesman said there appeared to be an increase in the scale and range of his offending recently.

“Of particular concern is Keith’s latest find – an implement used to smoke cannabis. We’ll be seizing the implement and speaking to Keith about where he’s acquired it from.”

So bad is his recidivist offending, the couple have had to put two plastic containers at their front gate with Keith’s ill-gotten gains, complete with apology note, so locals can reclaim their possessions.

The offending began when the feline felon lived with his old owner just a few doors down. It ramped up about three years ago, not long before Keith had a fallout with his sisters and decided he would rather live with Ginny.

Ginny would wake up to bras, whole washing lines with clothes and pegs, a large net curtain off a ranch slider door, pairs of Adidas or Nike shoes, underwear and tools strewn across her driveway.

Some items would return again and again – Keith took particular liking to a tradie’s steel-toed boots. Not one to do things by half, he would drag one shoe home before returning for the second.

So fed up was the builder that he put weights inside each boot, but to no avail. Keith still managed to drag the boots home between his front legs.

When he wasn’t pinching boots, Keith was stealing the man’s underwear and once took an entire load of washing off his clothes horse.

The local roofer has had his sealant gun nicked but by far the most embarrassing gift Ginny received before his latest drug haul was a Corrections officer’s shirt, underscoring Keith’s flagrant disregard for law and order.

Sleeping all day to burgle all night, Keith sometimes gets fixated with his prizes, including a bathing suit that he’s returned from the front box at the fence to Ginny’s side every day this past week.

“He’s just got the cheek of old Joe.”